On Thursday 12th January we were thrilled to hold our Springwest Academy Celebration of Success evening. This evening saw 68 students from Key Stage 3 receive awards in 3 categories:

As well as 68 awards, we also had amazing performances by our Creative Arts department. We had a year 10 GCSE Dance performance based on ‘Mothers of the Disappeared’.  This dance shines a spotlight on the plight of families in Argentina during the 1980s.  Our second performance was a year 9 piece called ‘Aftermath’ – this was year their first ever live performance to an audience – they did superbly well.  Our third performance was a Year 9 performance entitled ‘Mean Girls’ which was scripted by one of our own Year 9 students and discussed the dangers of social media and cyber bullying.

Towards the end of the evening we watched again Harry Wormwood’s Garage scene from our whole school production of Matilda.

Springwest Art exhibition which was displayed in the dining hall and was a great success. We saw for the first time live installations with some great pieces being created.  Springwest tweeted many images – you can see them if you follow @SpringwestA. 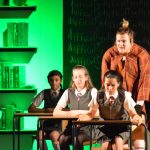 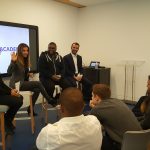