Yr9 students from Springwest take up the BP Challenge

We selected six of our best scientists in Year 9 to represent Springwest Academy at BP Headquarters in Sunbury-on-Thames. On arrival, students sat in their groups alongside scientists from other schools, and listened to a brief presentation about BP’s role within the world of energy and the role that oil and gas have to play, compared with renewable energy.

Students were then asked to used their collaborative skills to create a robot out of Lego and programme it using a tablet. Afterwards, they evaluated the design and sought to improve it by altering elements as they chose.

The official Environment Challenge was then presented.

Watch this space – it is the start of a sophisticated design project in conjunction with the BP!

The year 9 students involved will meet once a week during a PREP session to work on their design brief and they will be mentored by an Engineer from BP throughout the process. 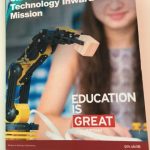